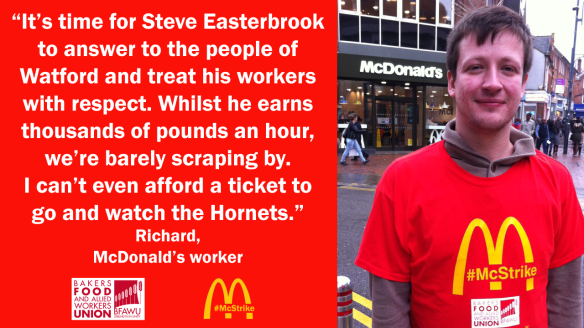 Photo/Filming/Interview Opportunities: Workers will be available for interview at each of these locations. Please arrange in advance.

Annalise Peters, a worker at McDonald’s in Cambridge said “The public and the labour movement have given us so much support, and encouragement. When we went on strike last September it felt like a new workers’ movement was being borne. This international workers day we will send a message to McDonald’s, the world’s second largest employer, that the labour movement is back and ready for action. We won’t stop until McDonald’s respects our human right to a living wage of £10 an hour and our right to a union”

Following local pickets striking McDonald’s workers will then come together in Watford,  the hometown of Global CEO Steve Easterbrook, to call on the multimillionaire to respect their right to a living wage and to form a union.

Richard Shattock of Watford said: “Steve Easterbrook needs to get on his private jet and come to Watford to meet with us and our union. The support from Watford people has been amazing, they have come out and shown their support for the McStrike. It’s time for Steve Easterbrook to answer to the people of Watford and treat his workers with respect. Whilst he earns thousands of pounds an hour, we’re barely scraping by; I can’t even afford a ticket to go and watch the Hornets.”

Workers asked those who can’t make it on the day to support them online. Lewis Baker, a McDonald’s worker in Crayford, said “Every message of support builds our confidence as we stand up to this bullying company and demand a fair wage and respect on the job. When we stand on the picket line we are standing up for everyone. When we win everyone wins! Get your McStrike on and show your McSolidarity!”