Fast food workers around the UK and across the globe are joining together to take action on Thursday 04 October following McDonald’s, TGI Fridays and Wetherspoons workers’ announcement of coordinated strike action.

Uber Eats & Deliveroo couriers and have decided to join McDonald’s, TGI Fridays and Wetherspoons workers in taking action on Thursday 04 October. Uber Eats couriers, as part of the IWW Couriers Network and joined by IWGB and GMB have decided to not log-on in protest over falling drop rates. They are demanding £5 per drop & £1 per mile as a minimum rate.

Fast food Workers in the US will also be going on strike between Oct. 2 and Oct. 4, in tandem with strikes and rallies by airport, hospital, child-care and higher education workers, and other low paid workers. The strikes will be centered in cities in Michigan, Wisconsin, Illinois, Florida, Georgia, California and Connecticut

Hospitality workers from four continents are coming to London to show solidarity with striking hospitality workers. An International Union of Foodworkers [IUF] conference will take place in London on the 3rd October at Unite HQ.

Times and Places of Actions:

A full list of solidarity actions and strikes called will be kept updated here: www.waronwant.org/ffs410 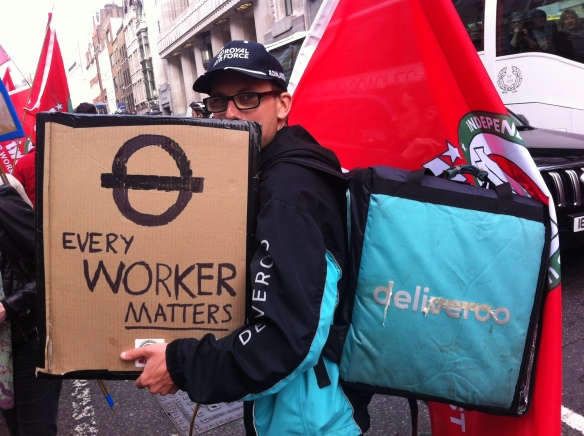